The other day I got my husband to snap a few pictures of my Icelandic gelding Vinur. It has been quite a while since I have seen pictures of us together and it is always enlightening to watch afterwards. Also, my husband doesn't know what is good or bad movement so he just keeps his finger on the trigger - literally! 800 pictures later I found a few that I want to share with my thoughts about our training. So here goes.

Vinur is from nature higher in the hind end than in the front end - and this is a conformational difficulty when you wish to ride your horse collected as this often gets quite a bit harder. In collection the horse will lower his quarters and rise in the front - this is still possible for him as well, but he will have to work harder for it. Or I will, as he is quite happy as he is when he is ambling about in the pasture. 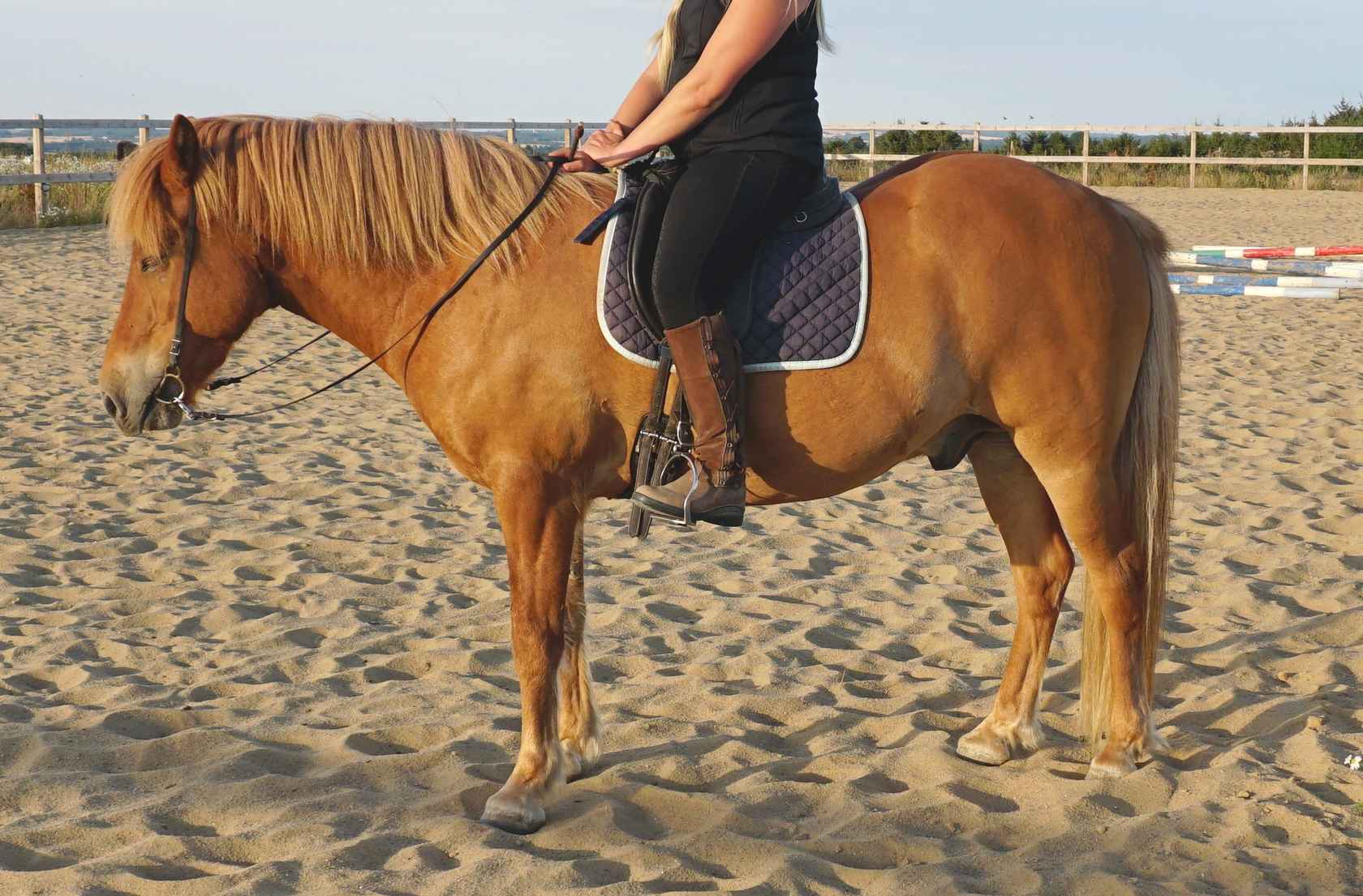 But when I sit on him my weight is pushing down on his withers and is conformation becomes even more pronounced. As you can see on the picture above there is quite a difference in height from the top point of his rump to where the saddle lies on his back. And if he moves around like this without me helping him find a better weight distribution, balance and self-carriage he will continue to look like this as you can see in the picture below. 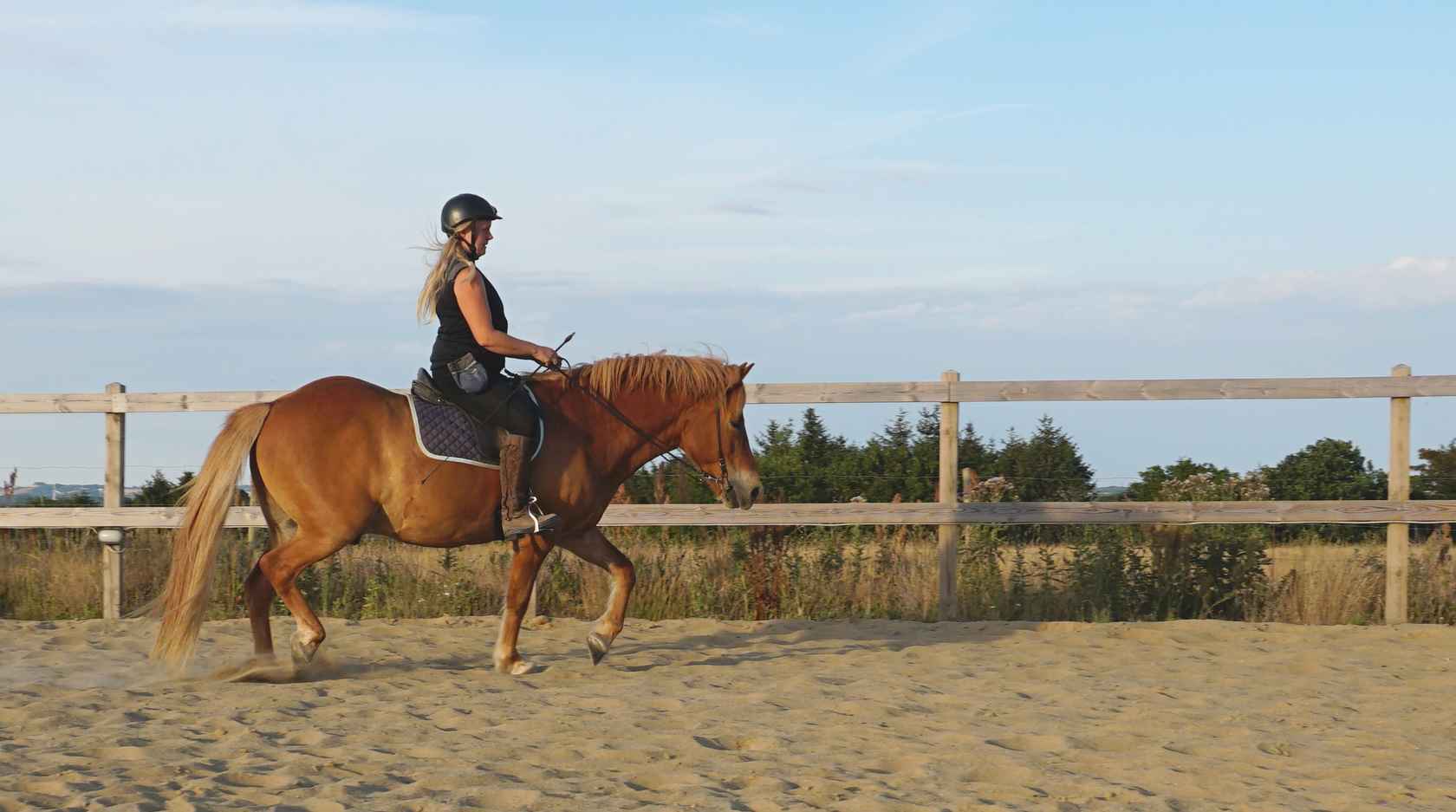 Over time this will give problems with atrophy of the back muscles, back pains, and maybe injuries in his legs due to added strain. So, he needs to move in a different way if he is to be a healthy riding horse. And change takes time and continuous training which I haven't been so good at lately with him. Hence the pictures, haha. 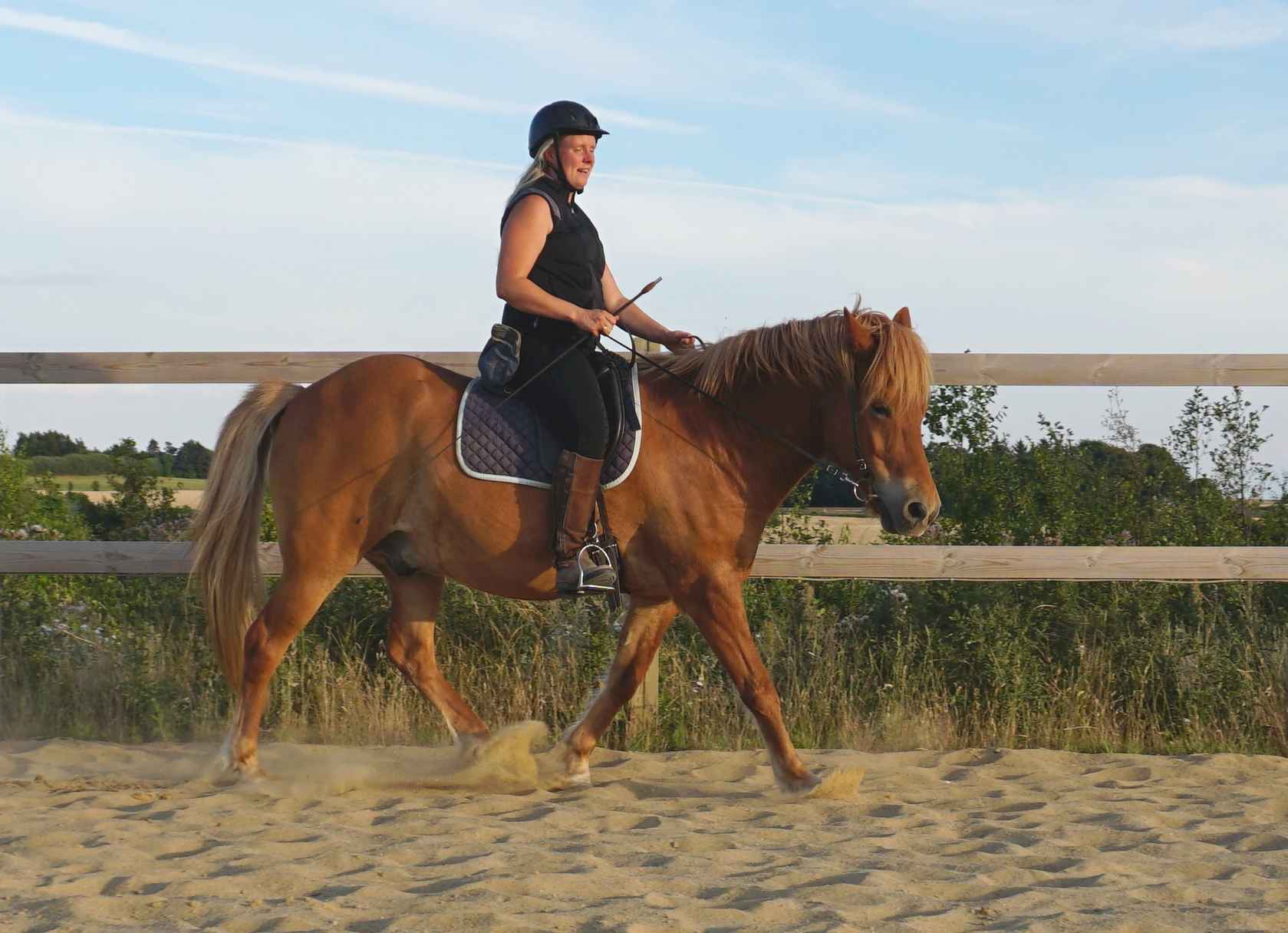 I'm our riding I am looking for moments when he lifts up better in his withers and stretches forwards towards the reins. Then his back is lifted up and he is carrying himself better. This is also the point in which there is a little more bounce in his step as he actually manages to activate the muscles of his thoracic sling. This in turn creates more of a suspension phase in the trot, whereas he otherwise manages to land with the diagonal pair of hooves before the others are lifted off the ground. In the picture above you can see his hooves landing before the other pair has lifted off, whereas in the picture below he is lifting off just before the other pair lands (which is necessary for them to step up to or over their own hoofprint). 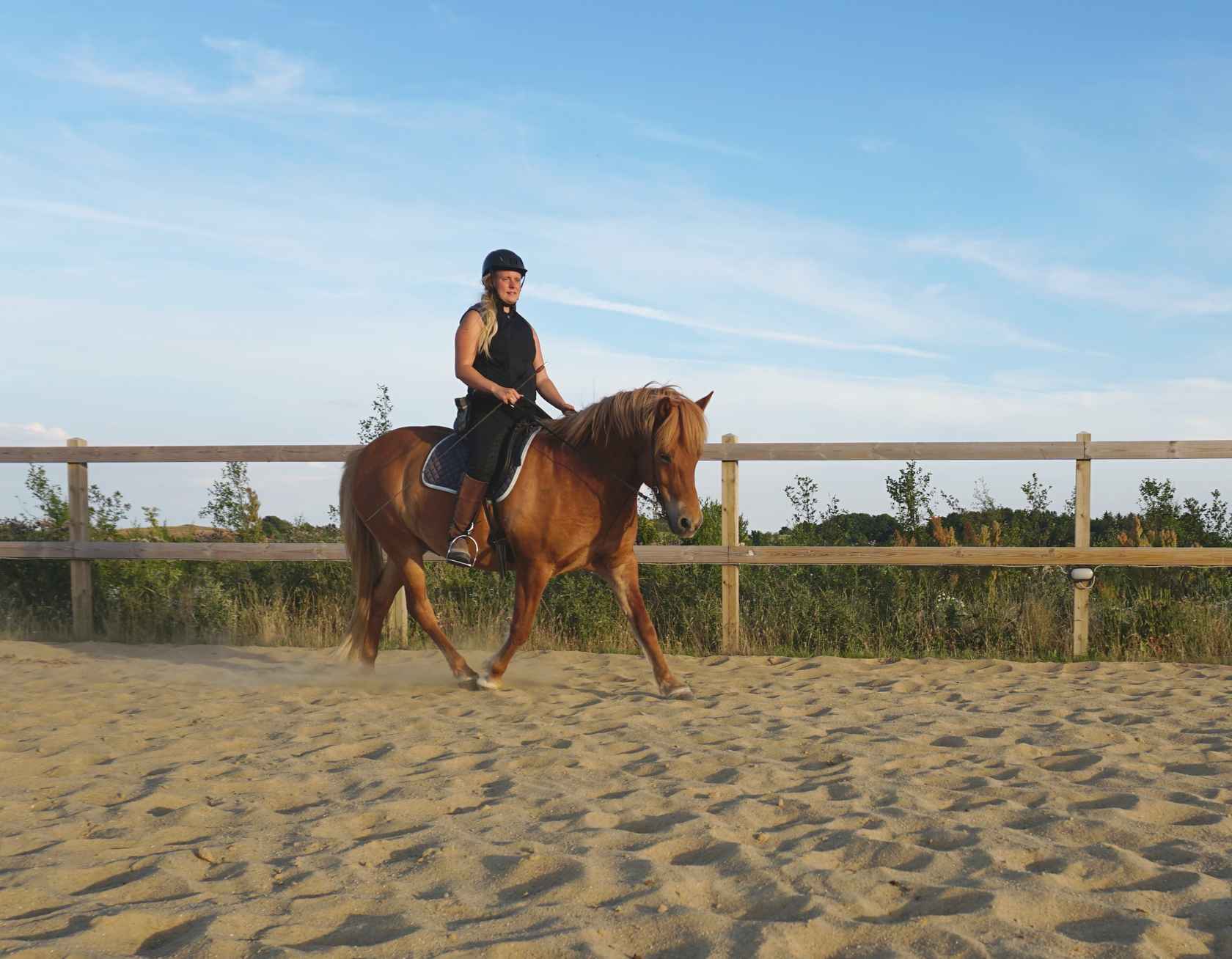 To achieve this, I do exercises where he is challenged to activate his thoracic sling; we do a lot of turns, changes of rein, circles and curved lines.

We also incorporate a lot of side movements, which are also very good for teaching them to balance themselves in the withers, but also for him to be able to stretch better on the outside. At the moment it can be very difficult for him to stretch properly as his muscles are tight. In the side movements like the shoulders in we can better focus our attention on the stretch of the outside. 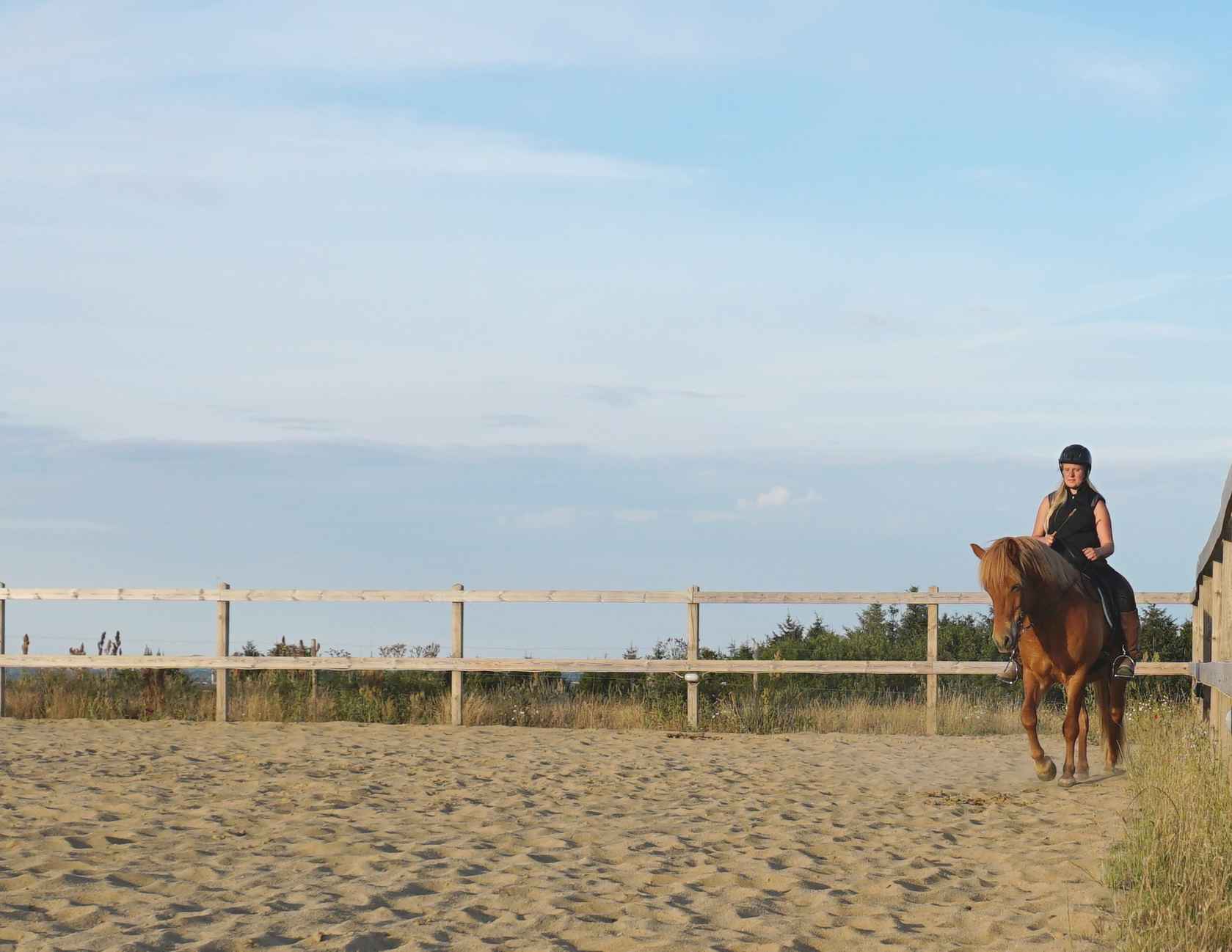 A thing I noticed when looking at the pictures is that sometimes his front legs seem too short. Obviously, this makes sense with his conformation, but it is a thing that might be able to be remedied a little so that he will have an easier time lifting in the withers. Of course, I can't grow his bones longer; he is long past this phase. But I can do passive stretches of his thoracic sling and front legs, to give him more space to lift up between the shoulders coming into better balance. In the picture below you can see him stretching his front leg forward in the movement, but that he is lacking elasticity to move et even further forward and stretching it more. 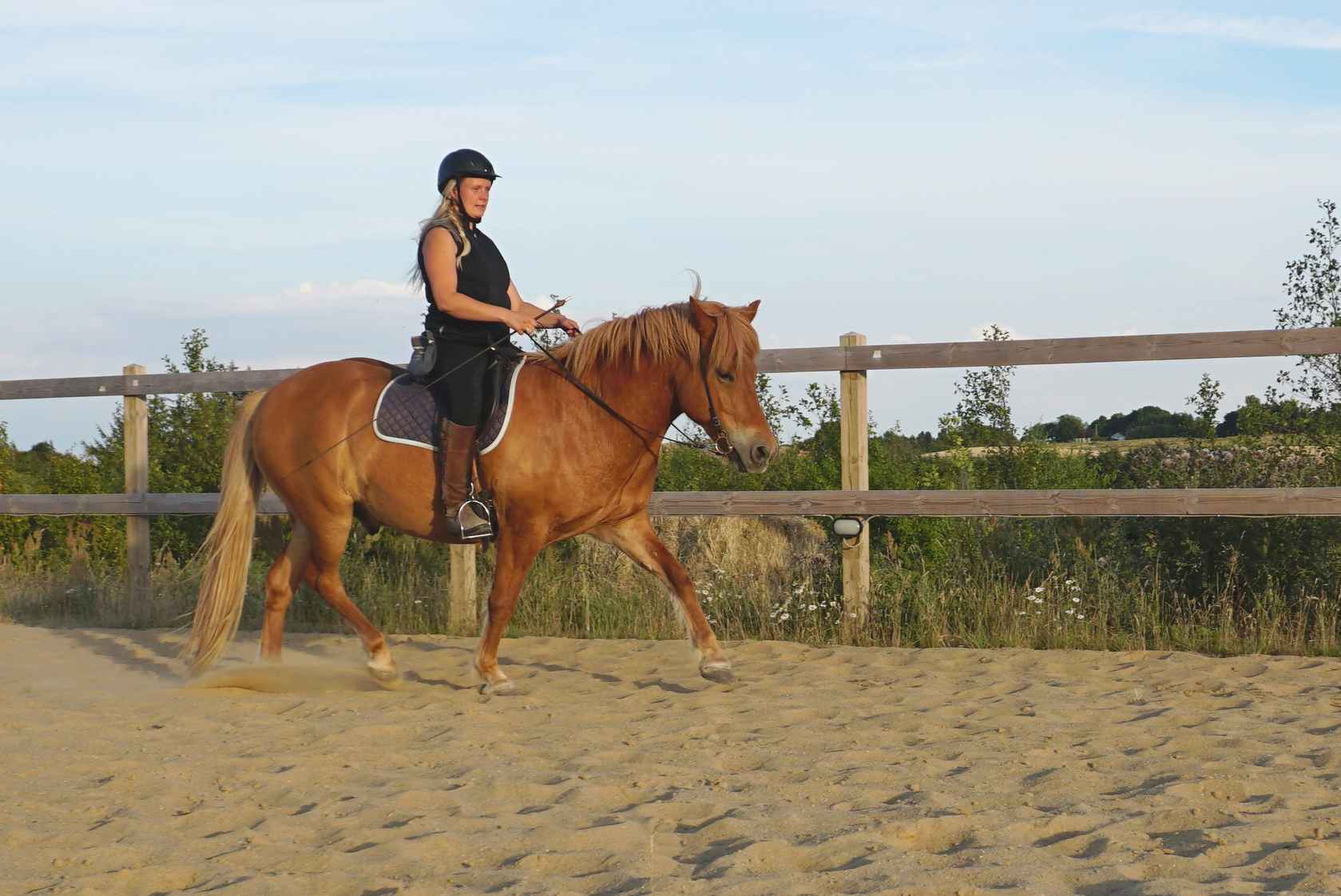 I know a lot of different stretches and exercises that you can do from the ground. Front leg stretches, pelvis tilts, back lifting etc. But I usually prefer to spend my time riding as I normally feel that this gives the horse more benefits (held up against limited time, if I had time for both, that would be best). However, in these pictures of different phases of his movement I could see that he would benefit especially from getting a little extra love to his shoulder and thoracic sling. So, in my future training of him I will put in a few stretches probably before riding, after a little warm up and after riding as well.